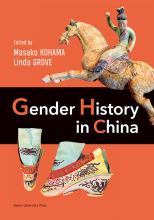 Gender History in China presents for the first time in English the work of leading Japanese scholars in the fields of archaeology, history, literature, sociology, and law who examine the gender dynamics that have shaped and changed Chinese society over several thousand years. The eighteen chapters and six columns look at the ways gender norms and customary legal practices shaped the family, kinship, and the social order, and how those norms were reflected in work patterns, inheritance, daily life, and literary works. Attention is given to the fundamental principle of qi (material essence) as a building block in cosmology, as well as in legal understandings of family relations. The second part of the volume turns to the dramatic changes in gender patterns from the late nineteenth century, looking at the inflow of new ideas, the struggle for political rights and economic equality, and the institution of new gender norms in socialist and reform-era China. The authors take up such topics as the view of the body in relation to Chinese cosmology, the incorporation of the military man into China’s model of hegemonic masculinity, the household registration system as a means of control, the appraisal of ‘talented women’, and the intersection of gender norms and nationalism. Gender History in China enriches our understanding of Chinese history and of contemporary Chinese society.